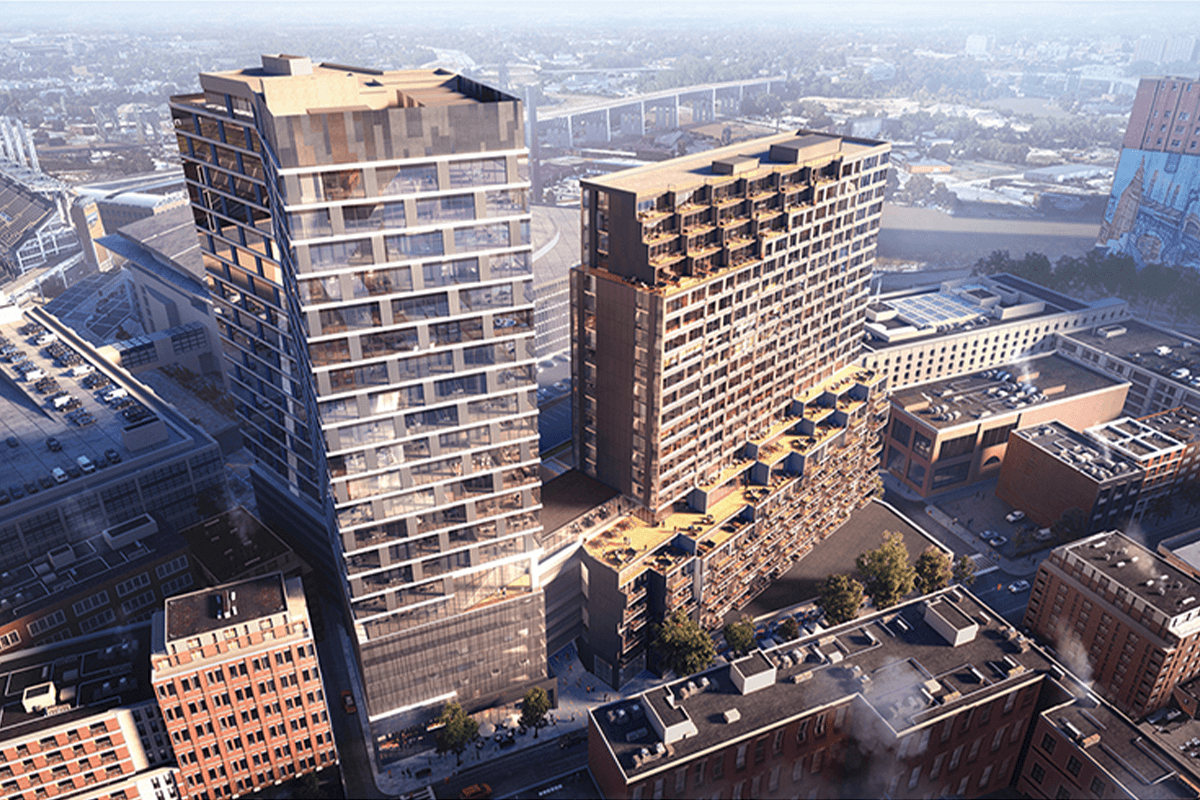 Stark Enterprises is pleased to announce that after years of hard work, the highly anticipated mixed-use development plan for nuCLEus was submitted today to the City of Cleveland for schematic design approval. Upon approval, this would propel the project forward with a target groundbreaking date of August 2019.

Since the project’s beginning in 2014, Stark Enterprises’ CEO and poet developer, Bob Stark, envisioned a new 21st-century focal point and connector for Downtown Cleveland. The nuCLEus plan creates two parallel towers with 80,000 sq. feet of commercial space, 350,000 sq. feet of residential space and 400,000 sq. feet of Class-A office space. The mixed-use plan for nuCLEus has two distinctive towers, both containing 24 floors. The 1st tower will consist of residential units capping out at 310 ft tall and the 2nd tower will consist of efficient Class-A office space above retail, social gathering spaces, dining, entertainment, and parking capping out at 353 feet tall.

“The entire vision of nuCLEus is to add millions of people to the streets of Downtown Cleveland by integrating a hub of business, residential and entertainment scenes bringing activity and experience for the rest of the thriving community,” said Chief Executive Officer of Stark Enterprises, Bob Stark. “Through our years of design and development, we have refined the plan to provide even more innovative space and placemaking, a catalyst for Cleveland’s on-going transformation into an internationally competitive city.”

The new plans are centered around the use of enhancing the connectivity, visibility and brand of Downtown Cleveland, maximizing space with a parking garage housing 1,300+ spots, pedestrian laneway between the two towers and community activity spaces. nuCLEus is on the site of the city’s iconic Central Market which before its close in the 1990s provided Clevelanders a flourishing center for food, entertainment, and shopping. nuCLEus will keep the same focus in mind; being in the center of it all in Downtown Cleveland. The same functions of the Central Market will be reborn as nuCLEus will serve as a link to other key downtown assets, creating a vibrant network of urban energy emanating from the Gateway District.

“The new plan responds to the changing demands of the market and is sized so that the project can move forward immediately. Public sector assistance is fully supported by incremental tax revenue generated by the project,” said Ezra Stark, Chief Operating Officer at Stark Enterprises.

Stark Enterprises and their partners, J-Dek Investments Ltd., plan to continue moving forward immediately on the nuCLEus project. To stay up to date on this project and all other projects under the company’s portfolio spanning over eight states, visit our portfolio page.